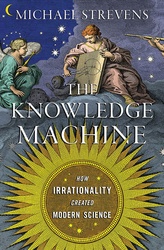 If you do not accept or decline by the reply date, you will be automatically shipped a Featured Selection and charged $1 more than the member price listed above.

Understanding of the origins and structure of science

The Knowledge Machine revolutionizes our understanding of the origins and structure of science. Like such classic works as Karl Popper’s The Logic of Scientific Discovery, this paradigm-shifting work grapples with the meaning of science. Using a plethora of vivid historical examples it demonstrates that scientists willfully ignore religion, theoretical beauty, and even philosophy to embrace a constricted code of argument whose very narrowness channels unprecedented energy into empirical observation and experimentation. Author Michael Strevens calls this the iron rule of explanation, and reveals the way in which the rule, precisely because it is close-minded, overcomes prejudices to lead humanity toward the secrets of nature.