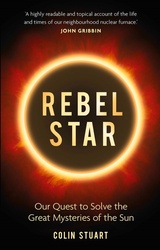 Rebel Star: Our Quest To Solve The Great Mysteries Of The Sun

Unravel the secrets of the sun

A mystery was born in 1929 when astronomers discovered that the sun’s corona is created by iron burning at a staggering 3 million degrees Celsius. With the sun’s surface only 6,000 degrees, this appeared to defy the laws of physics. Beyond being intriguing, the unpredictable nature of the sun’s corona poses a serious threat to life on earth. The possibility of wildly destructive solar storms is huge.

Right now, a new generation of ambitious solar missions are currently traveling closer to the sun than previously possible, allowing for new breakthroughs in heliophysics. Rebel Star is a timely guide, examining our long-held fascination with the sun, from ancient beliefs, to an up-to-date look at what we know.