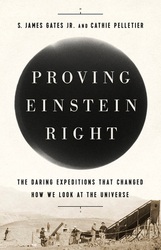 Proving Einstein Right: The Daring Expeditions That Changed How We Look At The Universe

Physics on the edge!

A thrilling adventure story chronicling the perilous journey of the scientists who set out to prove the theory of relativity.

In 1911, a relatively unknown physicist named Albert Einstein published his preliminary theory of gravity. But it hadn't been tested. To do that, he needed a photograph of starlight as it passed the sun during a total solar eclipse. So began a nearly decade-long quest by seven determined astronomers from observatories in four countries, who traveled the world during five eclipses to capture the elusive sight. For years, they faced thunderstorms, a world war, lost equipment, and local superstitions. Finally, in May of 1919, British expeditions managed to photograph the stars, confirming Einstein's theory.