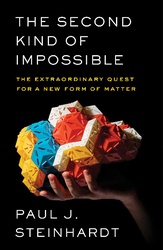 The Second Kind Of Impossible: The Extraordinary Quest For A New Form Of Matter

A story of science that reads like an Indiana Jones adventure, The Second Kind Of Impossible takes you on Paul Steinhardt’s 35 year long quest to challenge the wisdom that science already knew of all forms of matter. It begins with a curious geometric pattern that Steinhardt dubs “quasicrystal.” The scientific community calls it impossible. Over decades, he sets out to prove viability, and then to pursue his wildest conjecture—that nature made quasicrystals long before humans discovered them. Along the way, his team encounters corrupt scientists, secret diaries, international smugglers, and KGB agents. Their quest culminates in a daring expedition in pursuit of tiny fragments of a meteorite forged at the birth of the solar system.

“A rare and compulsively readable blend of science and thriller, The Second Kind of Impossible tells of the quest to find a new type of matter that would rewrite the rules of reality. Paul Steinhardt, one of the world's leading theoretical physicists, takes readers on a wondrous odyssey across multiple decades and continents as, against all odds, he helps to topple scientific orthodoxy.”—Brian Greene, author of The Elegant Universe

“This book is an epic account of two scientific triumphs achieved by Paul Steinhardt, first a thirty-year theoretical search for understanding of the exotic form of matter known as quasicrystal, and second a real-world expedition into the wilds of Kamchatka to discover natural quasicrystals brought to our planet by an ancient meteorite. It is as if The Origin of Species and The Voyage of the Beagle had been published together in one volume.”—Freeman Dyson, professor emeritus, Institute for Advanced Study

“Paul Steinhardt has produced an exciting and enlightening scientific detective story. He describes his quest of more than three decades to prove the existence of a substance that other scientists said could not exist. His journey involved scientists and smugglers and spies, taking him to the most remote corners of the earth. The tale is about far more than a new form of matter; it is also a thrilling look at how science works.”—Walter Isaacson, author of Einstein

“Paul Steinhardt’s The Second Kind of Impossible describes a truly amazing adventure story, full of twists and turns, right up to the very end, in a scientific quest for actual quasi-crystalline structures in nature, once believed genuinely impossible. It has my strongest recommendation.”—Sir Roger Penrose, professor emeritus, Oxford University