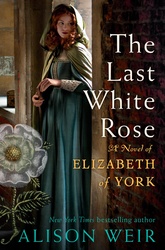 Elizabeth of York is the oldest daughter of King Edward IV. Flame-haired, beautiful, and sweet-natured, she is adored by her family; yet her life is suddenly disrupted when her beloved father dies in the prime of life. Her uncle, the notorious Richard III, takes advantage of King Edward’s death to grab the throne and imprison Elizabeth’s two younger brothers, the rightful royal heirs. On the heels of this tragedy, Elizabeth is subjected to Richard’s overtures to make her his wife.

As if in a fairy tale, Elizabeth is saved by Henry Tudor, who challenges Richard and defeats him at the legendary Battle of Bosworth Field. Following his victory, Henry becomes king and asks Elizabeth to be his wife, the first queen of the Tudor line.

“Like its predecessors, this is a detailed and convincing portrait of an extraordinary life. Taken as a whole, this series is a serious achievement.”—The Times